The @LegendsOfShield (Legends Of S.H.I.E.L.D.) Agents Haley, Stargate Pioneer, Lauren and Consultant Wing break down the Agents Of S.H.I.E.L.D. episode What They Become! They also run down the week in Marvel news, and run down all the awesome Legends Of S.H.I.E.L.D. feedback.Haley, Lauren and Stargate Pioneer love to hear back from you about your top 5 Marvel character lists, your science of Marvel questions, why Wing is wrong at any time, or any general Marvel feedback. Call the voicemail line  at 1-844-THE-BUS1 or 844-843-2871.Join Legends Of S.H.I.E.L.D. next time as the hosts discuss the Director's Cut of the 2003 movie Daredevil. You can listen in live when we record Wendesday nights at 7:30 PM Central time at live.legendsofshield.com. Contact Info: Please see http://www.legendsofshield.com for all of our contact information or call our voicemail line at 1-844-THE-BUS1 or 844-843-2871.Legends Of S.H.I.E.L.D. Is a Proud Member Of The Gonna Geek Network (gonnageek.com).

Hey guys, first up, just to follow up on my vm, truly awesome cast. The analysis on the Mid-Season Finale was epic and I can't wait to see how Team-Ward develops, or what Rayna becomes!

I wanted to give a bit of background on Dane Whitman (AKA, the Black Knight) in case I can win any converts and move him up into the top-five of any other listeners… 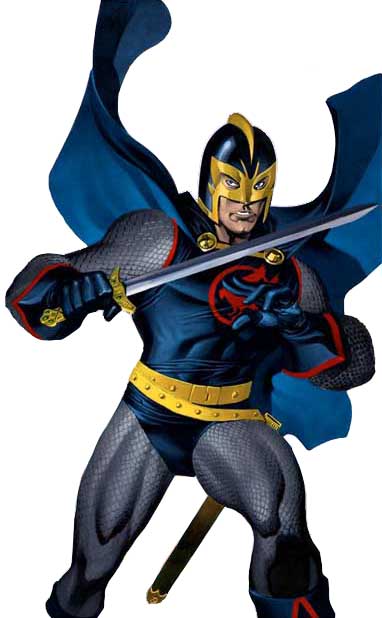 Lauren, you’ve probably seen Dane Whitman in a recent issue of Original Sin, where Marvel explored the long term impact of the blood lust linked to the Ebony Blade. Either there or as a recurring character in the current run of Avengers: World as the current leader of Euroforce. Check out Original Sin #2 of 5, as well as Avengers World #12.

Haley, you'll probably run into a great run of Black Knight pretty soon! One of my favourite appearances of both the Black Knight and Valkyrie (see my all-female avengers line-up) was in Defenders #4 from 1973. Its one of the first comics that I ever remember coveting back in the late 70s or very early 80s, probably from my Dad’s stash (I was too young to have picked it up myself when it came out). The heavy mystical/fantasy leanings of the early Defenders (including Dr. Strange, Black Knight, Valkyrie, Hawkeye) made a big impact on a fledgling D&D geek.

Dane Whitman first appeared with the Avengers in 1967 in Avengers #48, then moved around the Marvel universe for a while, including the Defenders as I mentioned. He later shows up again in the 1982s in Avengers #225 (in the middle of the epic Hank Pym & Janet Van Dyne - Trial of Hank Pym saga). As a side note, Avengers #227 debuts Monica Rambeau as Captain Marvel (who would later go on to lead the Avengers).

While a lot of people poke fun at the Jim Shooter era of the early 80s, it's a good stretch of Avengers to really get into and understand how some the characters we know today were shaped. And after all, this is when Janet Van Dyne is leading the Avengers even as you have Cap, Iron Man, Hawkeye and Thor on the active roster. A couple years later Monica Rambeau went on to lead it when you had Hercules on the team, so it was a pretty progressive line-up and approach to leadership at the time!

A final note on Black Knight; Dane is a complex character, who could actually bridge the gap between different aspects of the MCU. He’s in essence a normal guy (like most of Coulson’s crew) who has access to mystical weapons (ties to Dr. Strange), who in the past has ties to Eternals and Wungadore (Cosmic, Inhumans etc.). Translation: I haven’t given up hope that we might one day see him in AoS. A guy can dream can’t he… Formerly Amberite, but probably not Nellie or Nelson. I'd probably answer to either tho.
Top
Post Reply
2 posts • Page 1 of 1